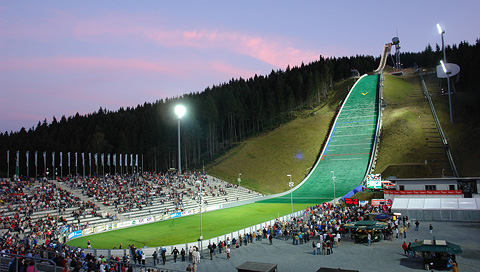 The Vogtland Arena in Klingenthal has become the most popular destination in the area. The impressing, light and modern architecture of the large hill and the judge‘s steeple will attract you, no doubt about that.
After entering the Vogtland Arena, its multifunctional heart, the area where events of all kinds take place, will open up to you. The Arena accommodates up to 33,000 people. Your tour starts at the large hill‘s coasting, passing the small incline „WieLi" that conveniently gets you up to the judge‘s steeple. Up there, the highlight of your visit is waiting for you: the impressing panoramic view over the whole area of the Vogtland Arena.
During competition time, the capsule on top of the hill is used to limber up the athletes. Back in the large hill‘s coasting, the snack bar, the outdoor restaurant and the shop invite you to take a break. 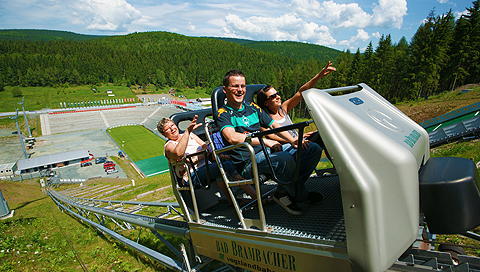 „WieLi" - enjoy the convenient way of getting to know the Vogtland Arena
After getting in one of the cars with four seats each, there will be a difference in elevation of 100 meters, from the coasting to the steeple. The small incline gets you up- and downhill.

The Vogtland Arena in Klingenthal is a perfect venue for all kinds of events. The offer varies from classic music to Rock ‘n‘ Roll, from fireworks to a Heavy Metal festival, from an oompha-band to operatic music. Famous artists like Peter Maffay, Chris de Burgh or the German boy band „Die Prinzen" have already performed in front of the large hill‘s impressing setting. In addition to that, the Vogtland Arena is also scene of numerous fairs and sporting events.

Ski jumping in summer and winter

In 2007, the first World Cup of ski jumping took place in the Vogtland Arena. Since 2009, the world‘s best ski jumpers come to Klingenthal once a year to compete against each other within the FIS-Team-Tour.
But also in summer, within the FIS Summer Grand Prix, it is possible to do jumps on lawn in Klingenthal. Ski jumpers and athletes of the Nordic-combined belong to those practicing constantly in the Vogtland Arena. All year long, exciting competitions and many visits of international teams make the Vogtland Arena a place worth visiting, for both, athletes and tourists.

Interesting facts about the Vogtland Arena