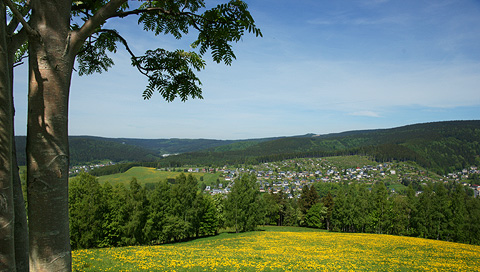 Since the beginning of the 20th century, the Kammweg has been developed by hiking- and mountain-clubs in the region between Saxony and Bohemia. Initially, it started in the town of Decin and ended in As, both situated in the Czech Republic. Later on, several connections between the Bohemian Mountains in eastern direction and Thuringia in western direction came up.
The trail is affected by the unique biota of these low mountain ranges with its highest peak called Keilberg (1.245 meters in elevation, located near the village of Gottesgab/Czech Republic). The peaks offer impressing views over Saxony and Bohemia.
The political imponderabilities during World War II had a bad influence on the hiking- and mountain-clubs and caused many changes concerning the course of the trail. That is why the Kammweg became less important.
Within the process of Europe getting united, the border areas between the countries gained in importance. That is why, the hiking- and mountain-clubs of Saxony and Bohemia work as a team to redevelop the trail. The Kammweg is about 300 kilometers long (concerning its length in Saxony) and offers a unique possibility to get to know and experience the border region.
Print page